They Found The Problem!

My Husqvarna dealer called yesterday, and Jeeves needs a new circuit board, which has been ordered and Jeeves should be back fixed and happy in a week to 10 days.  AND the circuit board is still under warranty, so I just have to pay for the labor.  Whoo hoo!!!!!!!!!!!!  Seriously, when was the last time you had a product that was still under warranty 4 years after you bought it?

In the meantime--now that I've gotten over my separation anxiety--I thought I might work on the sweater that I'm making for Andy's birthday, which is next month.  The back is done, and the Cambridge Jacket is mostly stockinette, but I found myself wanting to do ANYTHING but work on the sweater.  In spite of changing the pattern to add 4 rows of ribbing, the back was still rolling, and I was finding the pattern instructions really fussy for a really simply-shaped sweater, so yesterday I decided to chuck the pattern and design a similar sweater, though knit in the round and with ribbing as I live in the part of the universe where we realize that stockinette stitch rolls all the time no matter how much it is blocked.    So....... 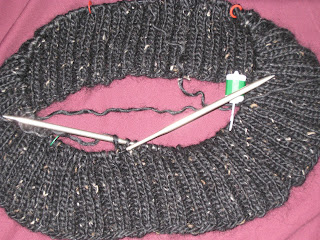 I think I'm going to do 4 inches of the K3, P2 ribbing and then continue the ribbing in panels under the arm, then eventually bring the ribbing back at the shoulders because that is the part of the original pattern Andy likes.  HOWEVER, I think I'm going to change one of the upper K3s to a small braid cable for interest--though I'm not sure how visible it will be with this yarn.  I will be steeking for the zipper and arms, and I'm using the measurements of Andy's favorite fleece pullover.  It took a while to do all the measuring, the gauge, and the math--too long, in fact, for Theo 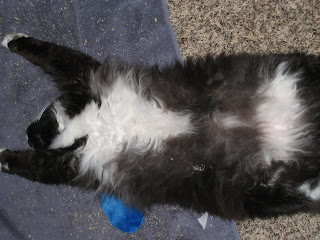 but once I got it on the needles, it has been just flying.  The nice part is, I'm able to knit without wondering if the pattern will have some sort of horrible "gotcha" ahead for me.....like a horribly over-sized neck or sleeves meant for alien creatures.  And NOW finishing the sweater by his birthday (July 16) has become a real--if challenging--possibility anyone dumb enough to attempt 100 projects in a year is certainly foolish enough to attempt a full-sized sweater in just under one month.........