If I knew how to attach sound to my blog, you would be hearing the theme for Rocky right now.  I have gimped! 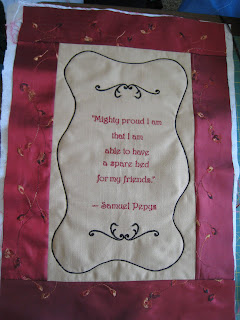 In case you didn't guess from the days without blogging, the idea of gimping on the wall hanging was frightening me.  I mean, decorative stitching is a commitment that one can't really back away from--ripping it out usually leaves a mark, if it doesn't ruin the material altogether.  Yesterday, just to make sure, I marked a corner of scrap tan material with one of my "disappearing" markers.  I put it in quotes because I've learned the hard way that it may not disappear from really fussy material.  Luckily, it worked on this one, so I drew a little freehand curving, 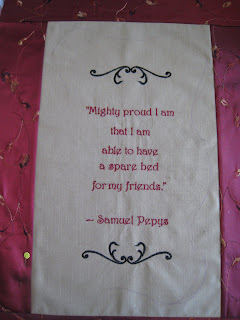 got in touch with my spine, and jumped in.  It isn't perfectly symmetrical or anything, but I'm okay with that.   It was a successful learning opportunity, and my drawing skills have always pretty much stunk, so I don't expect much of them.

If this were any other year, I would have gotten so freaked out about the gimping that the project would have been "put away for later," (a.k.a. "doomed to obscurity in the WIP bin because I don't like projects that have scared me silly"), but I need 100 projects this year which outweighs my normal tendency to be totally spineless when it comes to sewing.  Aha!!!

And there has been knitting! 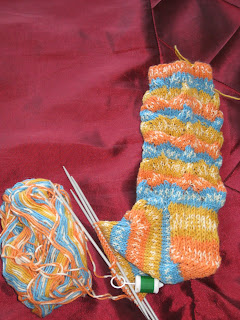 I should have just changed the lace pattern as the silly K1, K1 tbl into a YO drives me crazy every 11 rows, but this is such a popular pattern that I really wanted to give it the benefit of the doubt.  That is, until the heel flap.

Normally, I do toe-up socks.  LOVE toe-up socks.  I can make them as long as I want because I KNOW it is going to work.  AND no kitchenering (grafting) which is also a huge selling point.  However, heel flaps are generally reinforced, which is a good idea and one of the few reasons I'll break down and do top-down socks.  And the Monkey socks do not have a reinforced heel.  Or, I should say, the pattern doesn't have a reinforced heel.  MY Monkey socks do: 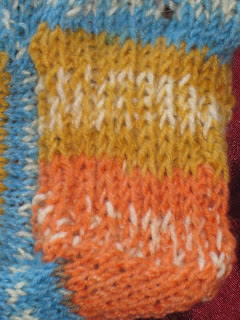 Just a [slip 1, K1] all the way across to make the heel a bit thicker and sturdier.

I have promised myself to try two more sock patterns just to double-check, but I think it's becoming quite obvious:


I do NOT play nicely with other people's sock patterns.
Think there's a support group?