I actually had quite a bit of stuff to get done this week (amazing how far one can fall behind in two weeks), so I actually didn't spend much of yesterday crafting, but I did manage to get this sewn together: 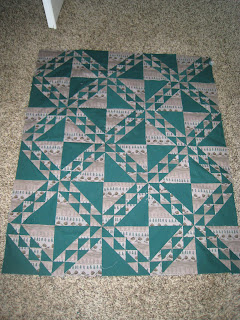 and since this part is now "finished," it sort of counts for yesterday.  One of the lines little triangles didn't match up exactly--and is off about 1/4", and it was bothering me enough that I had resolved today to make an entirely new block and replace it, but looking at the picture of it, I can't even find the problem, so I might leave it as-is.  I know--quilting is not really the ideal project for a year when I'm trying to finish an insane number of projects, but this is actually part of my new "project containment" policy.  As you might have noticed, things can disappear with rather alarming frequency in the sewing room, and I'm going to bet that it will be harder for me to lose an entire quilt TOP than one or two blocks, so.....Not that I'm saying I COULDN'T lose an entire quilt top, as it's really about the size of a pajama top, but I'm giving it the best chance of survival until it is actually done.  Which, you know, could be a while.

And I have started the March Project of the Month: 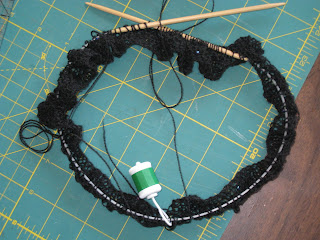 The lace cowl with an intentional twist.  After YEARS of making sure that my circular knitting wasn't twisted, this is actually extremely difficult to do.  I keep wanting to fix it.  There are already a few things I would change, but I think this might be a bit of a prototype for something that might eventually be pretty cool.  And, thankfully, it isn't very big, so I might get a few finished projects out this month.  To stay on track, I need to have 25 projects done by the end of the month.