One In Under The Wire

So last night--after posting my totals for the month--I finished the "WIP Celebration Scarf:" 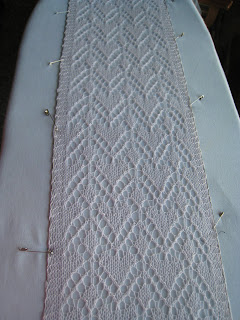 which was intended as a long scarf that would go in the gift bin, but somewhere along the line I got the idea to make it a shorter scarf to be worn tied at the neck--ascot style, I think?...and to keep it.  Unless I really, really, really need a gift before I get the chance to wear it.  (I lose a lot of scarves and socks this way)

So, 11 projects done in the first month!!!!!!  Of course, after that I was so excited that I immediately cast on 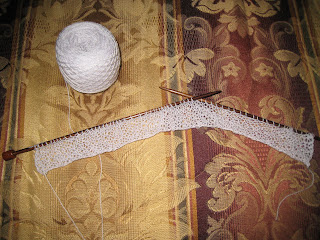 and if you're thinking that yarn looks suspiciously familiar, you would be correct!  It's the same yarn I used for the WIP Celebration scarf....which was left over from the Kimono shawl.  I'm not sure exactly how much of this stuff I have, but let's just say I'm in no danger of running out on this scarf.  It's going to be simple, but a wide, drape-y scarf for Andy to wear with his nice winter coat.  I've been looking for a silk or other nice--but manly--scarf for him for about 3 years, and at that rate it actually IS faster to make one.  Plus, it seems to help my crazy 100-project goal to have lots of knitting options available...simple, relatively small things to carry in my purse, more interesting things for when garter and stockinette make me want to beat my head against a wall, and non-splitty yarn for knitting while reading.  If I could knit and walk, I'd have that category as well, but I have tried it, and unless I'm just going to walk around our back yard, it's a pretty suicidal thing to do.  I've seen pictures of men and women walking and knitting back in knitting history books, but 1) they are drawings not photographs, so I'm only assuming they are accurate; 2) they didn't have power poles and cars zipping past them at 50 miles an hour (the cars, not the power poles); and 3) one is probably a lot braver and a lot less whiny when the choice is "knit or freeze." 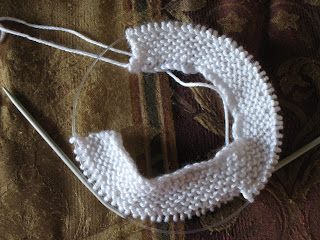 And I have decided to start the neck of the cowl sweater at 13 inches--4 above where the pattern says to.  I think that should be a reasonable place.  Not that there's anything wrong with other people choosing to have that sort of cleavage, but I haven't turned 40 yet, and while I know that at some point my belly button might have more to do with my cleavage than I'd really like, I'm not there yet.......