Originally I had intended to assert that I had not yet actually decided to attempt an entire sweater for the Ravelympics, when I found myself scrounging in the closet for the appropriate yarn.  This means that I have apparently committed to trying to knit one entire sweater in 16 days.  I haven't actually forgotten that in the past I have called Elizabeth Zimmerman a few purls short of a ribbing for suggesting that her January aran pattern could be completed within a one month time-frame--especially since it took me 4 months just to whine about the steeks--but I think yarn must emit certain fumes that erase all rational thought.  Think about it--this would explain the existence of size zero (or, heaven forbid, size 000) knitting needles.  It is such a powerful force that I actually caught myself thinking, "Hm....should I also enter a WIP just in case I finish the sweater early????"

I was relieved to see that projects could be entered in more than one event, so I will be also be able to enter the "Stash Compulsory Dance" event, as the yarn of choice 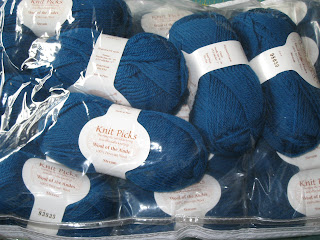 has actually been in my stash for about 5 years.  I ordered it when I was planning to make Andy a sweater--sort of defying the dratted "Boyfriend Sweater Curse," because we were engaged but not yet married when I made it.  When I ordered this yarn, I was as yet unaware that to the male half of the human species, "blue" is only acceptable as a color if it is somewhere within the royal to navy shading.  Anything lighter or have any other variation is unacceptable as it somehow challenges their masculinity.  I've never quite understood this, as even though there are shades of pink I don't particularly care for, they don't make me think I might lose a breast or an ovary if I wear them.  But, we moved on to a safer blue 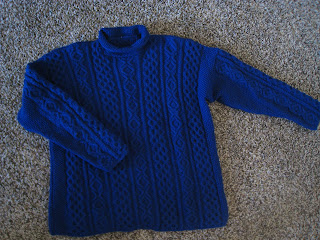 and I kept the questionable yarn for a future sweater for me.

Does anyone know how long a human being can go without sleep. and is it by any chance 16 days?????