In the future I'm thinking it would be a good idea to either A) combine all my button stash into ONE container, or B) remember that my button stash actually is in several containers.  Not to get all "organized" or anything, but this does seem somewhat logical.....

All of that aside, I found buttons! 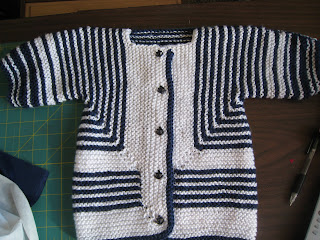 And I think they are perfect.....aside from the fact that they're sort of pointy and catch a bit on the yarn 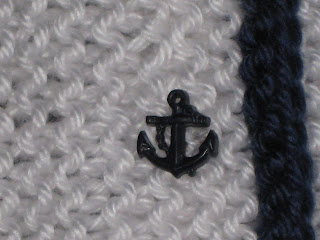 but isn't cuteness more important?  Especially when I'm not the person who will have to button them.......?

After swearing loudly about how long the BSJ was taking and how I was tired of working on it, last night when I was ready to cuddle up under the covers with a book I discovered--horror of horrors--that I didn't have anything to knit while reading!

Now this might be a tragedy in my life at any time, but in a year when I'm trying to complete an insane number of projects, this was just an impossible situation.  So, after a brief check through my Ravelry queue, I cast on 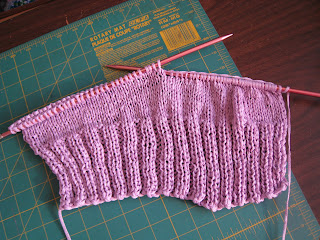 This is on size 10.5 needles, which would be absolutely perfect except for one tiny detail:  Every time I use these needles it reminds me of the time we used them to give my "Baby Alive" doll an enema.  (There are some memories that those who did NOT learn to knit a child just won't have).  For those who aren't well versed in some of the bad toy ideas of the 1970s, Baby Alive (which for some unknown reason is STILL available), the doll came with some food powder that turned into a gelatinous goo, which optimistic children then "fed" to the doll (who could sort of chew with the assistance of batteries), and then later the doll would "poop."  And this was a selling point for some reason--probably for children like me who were the youngest and therefore not very well acquainted with the real thing.  At any rate, I think the goo had to rely on gravity to actually make it out, which wasn't all that effective.  Thus the need for a large, long pointy object........

On a less disgusting note, I thought I would take advantage of a napping cat 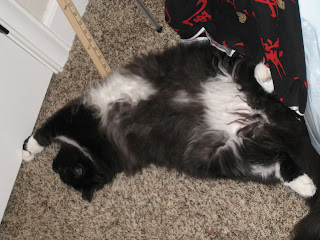 to get the table runner finished.  I got one side of the fusible fleece cut before a displeased Theo caught me.... 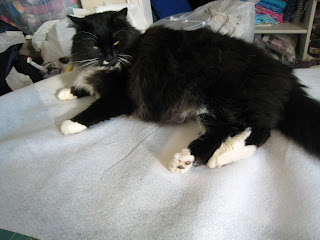