This weekend I wanted to ASTOUND you with 2 more finished projects.....which is why there were no blog entries.  I swear that the BSJ should be almost done.....but I've thought that for the last 2 days as well.  I do have one finished project to show you.  Remember this? 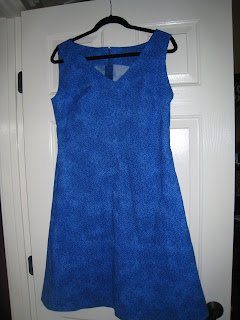 Yah, I don't either, but I started it sometime this fall and I have been moving it around in the craft room ever since.  It is truly lucky to have survived this far, as I missed a step on the pattern and to fix it I had to rip out the zipper and do it over a second time!  It seems that my desire to finish 100 projects for the year has overridden my loathing of zippers and has saved this dress from the Bin Of Projects Which Shall Not Be Named.  Of course, I'm going to chalk it up to "personal growth" anyway.  Hey, my blog....my rules.

Theo wanted nothing to do with the dress, but the next project, 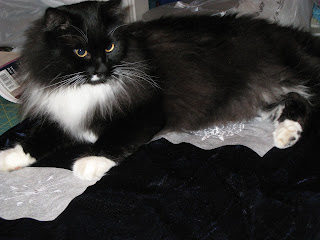 he is all over.  Literally. 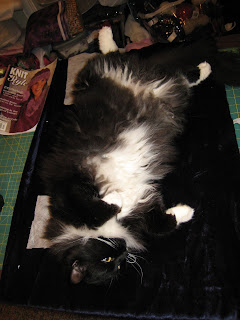 When Theo is through with it, it will be a table-runner of sorts.  Being a maniac, I decorate our house for seasons every year.  In all honesty, it started because we bought the house in July of 2006, had a house-warming party in August, then got married in September AND HAD AN OPEN HOUSE THE VERY NEXT DAY.  It was easier to buy some fall decorations and put them up than to decide on anything permanent (or, you know, find them in all the boxes...), and now 4 years later I am STILL working on permanent decorations.  Anyway, that's a really long way to say that what Theo is hiding will be a winter decoration--sort of a table-runner made of navy plush with snowflakes embroidered on it.  And, of course, cat fur.