Theo Is Having A Tough Day Today 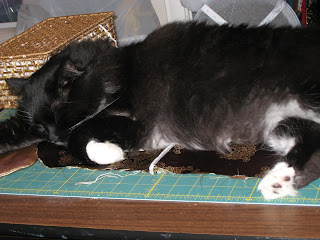 then he decided to help me while I hung these 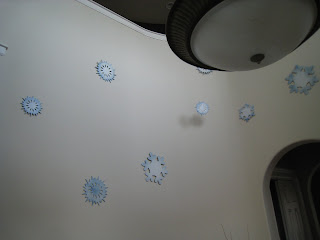 which are wooden snowflakes that Andy made for me this year.  We have this huge, blank, curved wall just as you walk in the door, and now that the tree and the festive garlands are gone, it's big, white & boring, so I was looking for something to liven it up a bit.  Anyway, you know how when something is on a string and you push it away from you, it will come back?  So does Theo now, though he seems to think it was attacking him.  He ran down the stairs and took up refuge down next to the bottom of the stairs, but then when I lowered one of the snowflakes (which are suspended by fishing line), he seems to have thought the snowflake was attacking him, and spent the next hour hiding under the improvised "kitty tent" in our room.

He was just getting over that, when I frightened him again by taking my blocking wires out of their tube--don't ask me how.  This 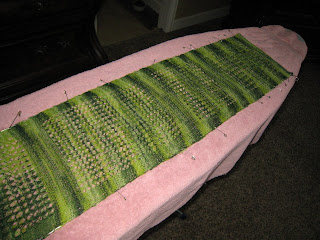 totally traumatized him.  I guess I could have been nice and blocked it on the floor so he could lay on it, but it's kind of exciting to block things WITHOUT getting cat hair all over them.  Now he's hiding in the corner 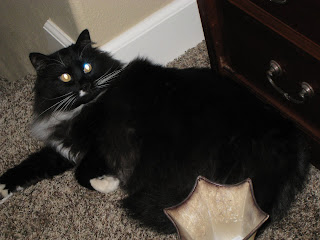 and I am keeping my scary self away from him.

If it doesn't frighten him, we will definitely need to spend some time sewing tomorrow.....
Posted by Toni at 4:57 PM 3 comments: