One perk to having an entire tub of WIPs is the great variety. Yesterday I was helping a beginner knitter to do a knitted edging on a blanket, so it seemed like a good time to dig out the baby blanket 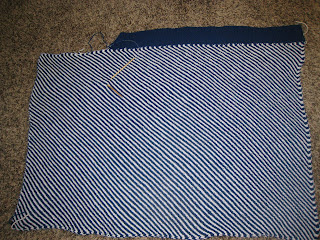 which is STILL on the first side, but at least I'm more than halfway along the side by now. 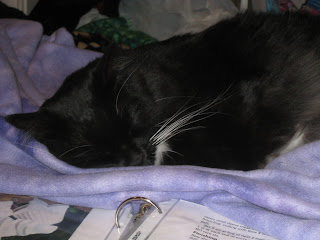 --and have been knitting. Remember the January Aran? Probably not, since it's September by now, but I had only one sleeve to go before the steeking which totally freaked me out and sent the project to the Project Time Out Bin. Apparently it's for projects that frighten me as well. Deciding finally that I AM an adult (sort of), I dug it out and 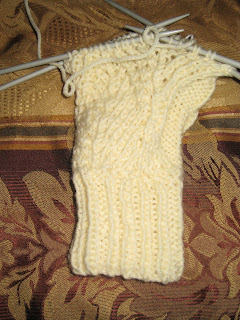 have a second sleeve well underway. I had the sense to keep the first sleeve in the bag with it as reference, but when I dug it out I discovered 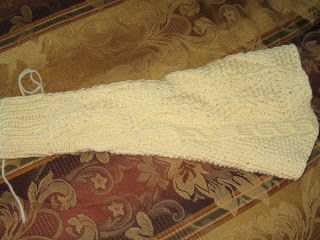 it's about 2 inches too short. No idea what I was thinking, though as this was during the kitty rehab episode it's quite possible that severe sleep deprivation led me to read "18 inches" as "16 inches," so I have a bit more to do on that sleeve as well. But at least one sleeve is almost done.

Theo has been enjoying the knitting more than usual 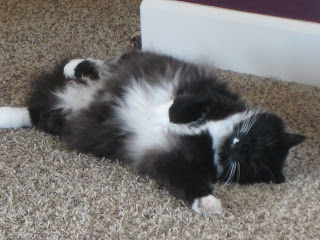 curling up near me no matter what room I'm in as he really hates canning. I can't stop and pet him whenever he comes in and rubs against my legs, and there's just no good place for him to supervise in the kitchen. I don't think he's all that crazy about the smell of cooking vinegar or dehydrating jalapenos either, which I can't really fault him for. Tomorrow I'm doing some carrot salsa and more pickles, so maybe I'll set up a little card table for him in the dining room.