So I had planned to work on the Christmas quilt today, but I struggle with quilting on the best of days. On days like today when I am seriously short on sleep it is best to just step away from the quilt.

Why, might you ask, am I short on sleep? 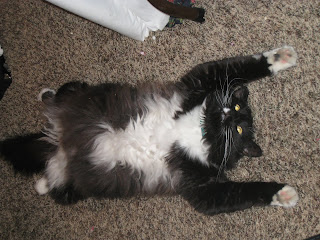 Ever since the kitty water torture therapy, Theo has been coughing pretty regularly. Initially I assumed this was due to hairballs caused by his continual licking inbetween water sessions. So, we regularly smeared him with a hairball goo that he absolutely hates and which he managed to fling onto every surface in the house. A tube and a half of goo and a lot of scrubbing later, we concluded it wasn't hairballs. The last trip to the vet revealed that my little sidekick had gained 3 pounds since his surgery and the vet really seemed to peg me as a big sap and sold me some pain killers and arthritis medicine to see if he could become more active which might theoretically help his breathing. One day of the pain killers gave me a comatose kitty, so we dropped that and just spent a lot more time playing. But he still coughed. So, Wednesday I took him to a different vet--one who had helped us during the entire cast ripping-off episode.

Theo has asthma (and has lost two and a half pounds--yay!).

In general, the asthma wouldn't be so bad, but ever since we have curtailed his outside privileges, he has been using litter boxes more, and of course the clumping litter we have been buying creates a lot of dust & has made his mild asthma much more noticeable--and has covered every upstairs surface with grey dust. The doctor gave him a shot that will clear up his symptoms for 6 weeks and told me to switch cat litter.

Going on 5 hours of sleep, I decided knitting with big needles was my best bet today, so I finished the front of the yoke sweater 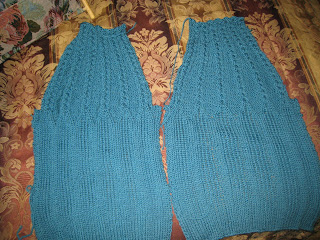 (and why they pattern isn't just done as a normal raglan is anyone's guess. Maybe someone at Vogue thinks seams are fun?), and I started the sleeves: 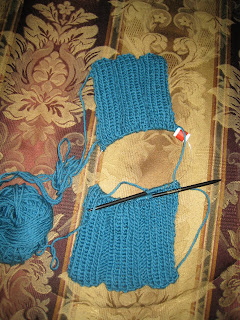 I was hoping to be able to say I had used up one more ball of yarn today, but I'm not quite there. But I am really jazzed about perhaps finishing two projects in a row, so maybe I could finally be contracting a little case of "finishitis".....