Yesterday being the first really nice day in quite a while, the sock, Theo, and I decided to spend a little time outside: 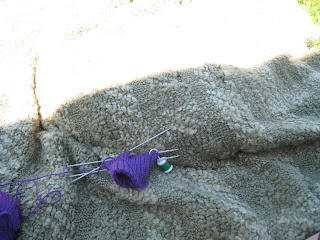 Theo is actually the lump under the blanket, but he finally decided that was a bit too warm. 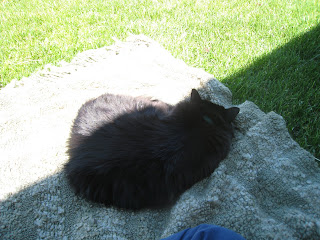 The second sock is progressing nicely: 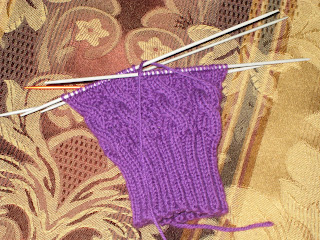 and is speeding along now that I have figured out that if I finish it in June, I could technically cast on something new, which really defeats the whole idea of WIP Wrestlemania, but it is getting the sock knit, so it works. I generally don't have second-sock-syndrome, but I generally don't graft toes either. I see a distinct connection.

So I'm holding in at 19 WIPS, and as Daniele mentioned, it hadn't seemed like I cast on that many projects this year. As it turns out, 10 of the current WIPS are leftover from my previous WIP pile--the 10 left after I finished the 14 in a row last year. I don't know if that makes me feel better or worse, but it does explain where all my size 4 needles went....