Here in the "Global Menopause" climate, we're swinging between 50 degrees overnight and 80 degrees in the afternoon, so I have figured it out:

Knit in the morning!

The Kauni cardigan got some attention today 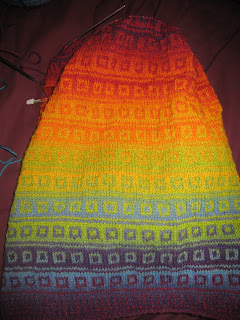 and the yoke cardigan has a finished back! 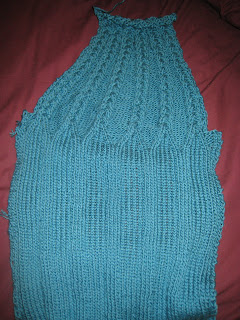 In general, I would say this is an incredibly stupid design for a sweater. The sweater has a yoke, which in 99 cases out of 100, would be knit in the round so as to eliminate seams. Not this one. Originally I had planned to just knit it in the round anyway, but the pattern calls for a zipper within the yoke. Checking Ravelry, some people felt it was fine without the zipper and some added it. I thought it would be easier to do a few useless seams than to cut a hole for a zipper. I haven't actually put a zipper in a sweater yet, but the only thing I can think of that might make a zipper in a knitted garment worse is to combine it with a steek. I shudder at the very thought...

This is a wool yarn, but it might get some attention this evening, in spite of the fact that it's 9:00 at night and it's still 78 degrees and the house is roasting because our heat is still set because of the 50 degree morning thing. I'm using Elann's superwash chunky yarn, which is a delightful yarn (and in my best nonenabling knitterly manner, let me just say that Elann is having a full-bag sale currently--10 balls for $21), but it is wool and ordinarily it would drive me from the very room, but we have 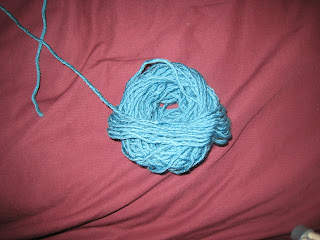 an almost used up ball which could be added to the yarn tally. Maybe if I get a REALLY big glass of ice water.......