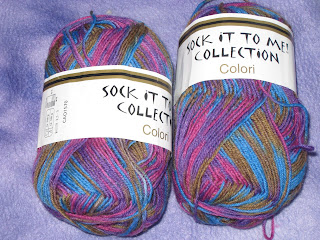 and was just about to cast on for a new pair of socks, when my small, rational self--who never usually speaks up in regards to knitting--said, "Hold on a minute....isn't this sort of behavior how we became the WIP Legend in the online knitting community???"

She's not a talkative part of my personality, but she has a really annoying habit of usually having a point & being right and all of that, so.....

To show I really have grown as a knitter, I dug out the Kimono Shawl 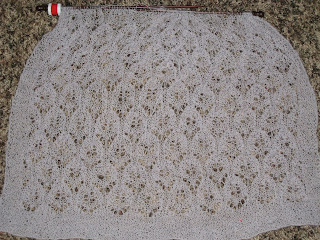 which had been busily tangling itself up with all the other projects in the WIP bin (cobweb yarn always being a bit of a troublemaker). So far it's only gotten about 6 rows, but those are 6 rows I didn't have, so that was something.

Then, because I still really wanted to make those socks but was desperately trying to prove that I have SOME willpower, I finished another block for the Warm Up America afghan 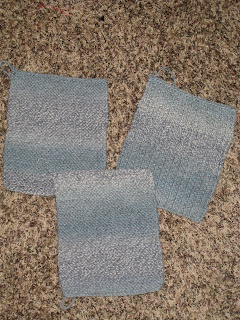 which actually brings me to 4, but one has already been turned over to the organizer. If you're noticing a preponderance of garter stitch blocks, let's just say that while I support this charity project completely, I support it a lot more if the knitting is fast & mindless.

The complicated knitting was saved for my January Aran 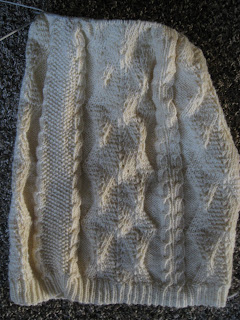 which is actually going to be more of a May or June cardigan at this rate. I have 5 more inches to go on the body before working the neck, then the sleeves and the....gasp...steeks. For those of you unfamiliar with the term, steeks are where you ON PURPOSE cut your knitting to add armholes and/or front openings for cardigans. This technique allows you to knit a sweater entirely in the round instead of back & forth, and makes you among the bravest of the knitting community. I fear it might drive this knitter to drink, but we'll jump off that bridge when we get to it........