The vet seemed to think that getting Theo to use his leg was going to be the problem. 5 days after the cast was removed, I can assure you that this is not the problem. Trying to get him to proceed gently--that is the problem. We haven't been doing the kitty therapy exercises we were assigned--he's way past the "try to get him to put weight on the leg." We're into the Toni-needs-the-therapy-phase of "trying to keep him from running, pouncing, and jumping using his leg. Overachiever pets are frightening.

I really, REALLY am glad Theo is doing so well, and the vet was worried that the staph infection would come back and said to keep a close watch on Theo in case he was listless and ill. What to do if he was hyper, feeling great, and ready to jump on everything they forgot to cover. Not only is he trying to walk on the leg, he is going to shock them tomorrow with his ability to bend his ankle. Of course, to Theo the big excitement is 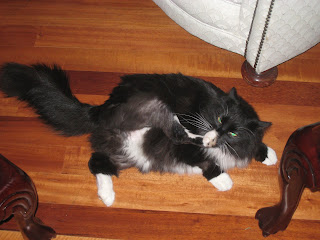 he can finally lick his foot! VERY big news in the cat world. When he can scratch his ear with his injured leg, he will be in kitty ecstasy! I'm glad to see him active--from certain angles he's looking a bit pudgy 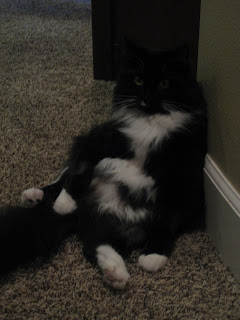 Doesn't he look like he just needs a beer and the remote control?

There hasn't been a lot of knitting as monitoring Theo is now a full time job. I am about to use up one more ball of yarn on the yoke sweater 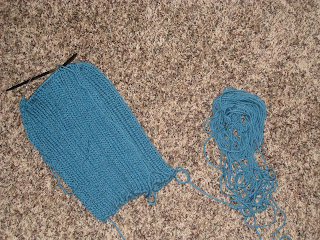 which I am actually tempted to frog and knit in the round as the sweater should have been done in the first place. Maybe I'll just join the pieces at the yoke and knit that in the round. I'm usually not too snarky about following a decent design, but this one is irritating me. Maybe it's because this one would have been faster and easier and made more sense knit in the round. Or maybe it's because Theo doesn't believe in anyone getting more than an hour or two of uninterrupted sleep....

One of us is getting a little cranky and could use a day of kitty daycare, and it wouldn't be a quadruped......