So Theo hasn't been able to remove the splint, but he ate a great deal of it. We had a soft collar for him from the vet, which only slowed him down a little, and I tried spreading Tabasco sauce on the bandages, which he seems to have actually enjoyed. I finally called the vet & they said they should check that he hadn't damaged anything with his chewing and that they had a solution for me. 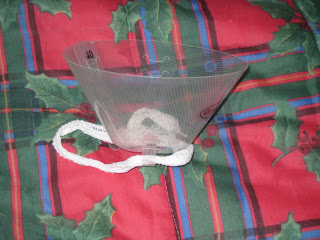 This is our newest addition to the kitty torture device collection we're accumulating this month. As if that weren't enough, he's back on antibiotics for a possible infection from last week's cast removal trick. Three more weeks......

Last night I ran to the pet store and found this: 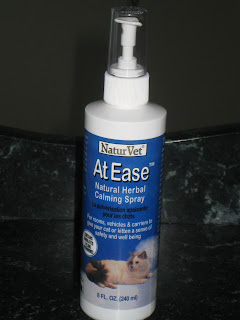 It's a kitty pheromone spray that is supposed to help cats feel calm and relaxed. I think the new kitty satellite dish is perhaps beyond its powers, but Callisto is positively thrilled. She's purring even when there's no one in the room. Of course, that could just be because we've found a new way to torture Theo.....

Last night I learned one should never go to a pet store when feeling guilty about what one's cat is going through. I came home with this: 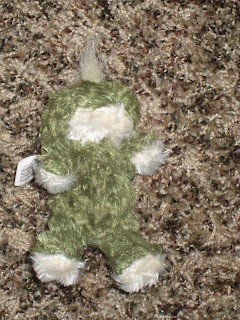 which is supposed to be a refillable catnip frog. I think it looks a bit like Godzilla myself, and Theo is a bit beyond bribery right now.

With all that is going on and all the endless waiting at the vet clinic--and since I've already read all the cat material they have--I decided last night it is time to put an end to the WIP marathon and cast on a fun, new, portable project. I'm down to 12 WIPS left, finished 14 in a row, and I've reached a point where I'm not knitting when I normally would because I don't have a portable project. I've joined a "One Day A Week For UFOs" group on Ravelry so I'll still work on them, but I decided I deserve a new project.

And this morning--I still don't have a new project. I haven't started anything new in 6 months. I've thought about it, fantasized about it, dreamed about it, but I've stuck to my guns (needles). I've thought of project after project I would love to start, and now that I have that freedom......I can't decide what to do. Scarf? Hat? Socks? Baby Surprise Jacket? It's overwhelming!