You Know, I've Had Better Weeks

So on Thursday I really thought we'd have clear sailing for one week--I had 2 days of pain killers to give Theo and 5 days of Valium for him. On Thursday the pain killers knocked him for such a loop that he spent the day laying quietly, but by Friday he was disoriented and angry and flinging himself around wildly. Worried that he might cause himself more harm, I gave him one of the Valium pills, which instead of calming him down made him even wilder and I spent 3 hours trying to keep him from killing himself. Not that the vet told us this when he gave us the valium, but for MANY cats, it will indeed have the opposite effect. Don't you think potentially giving an injured kitty speed might be a key item to mention?

Since the new pain medications were making him loopy and angry, Andy made a cross-town trip to the original vet clinic last night to get another 5 doses of the pain medication we were giving Theo when we first brought him home. Mercifully, they make him really sleepy so we haven't had a crazy cat to contend with today, but we have had to alternate attending Christmas parties & staying home with the cat. This is what our life has become. 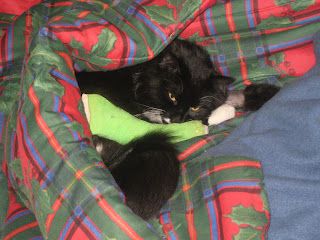 So, no knitting, no sewing, but I have decided that I deserve some reward yarn on January 1. I was just going to buy yarn for Andy's next sweater and a shawl I promised my mother (and if you can believe it, with 46,000 yards of laceweight in my stash, I don't have any white yarn), but after all of this, I am going to reward myself with a sweater. I'm thinking something in colorwork since I don't do that very often, and I think I've narrowed it down to either this one, which worries me a little as it is one size only and that one size is pretty huge, or this one. Or maybe I should get really ambitious and try this one.

Good heavens. Think of the projects I'd be contemplating if I had taken Theo's valium.....