Last night Theo discovered the ultimate weapon in his bid for freedom: destroying the carpet. If he digs hard enough, he can pull up the towels, sheets, and garbage bags that had been the bottom of his makeshift cage. As he discovered this trick late last night when his humans were exhausted & in serious need of sleep, he has now achieved a limited amount of freedom. He's learned to crawl on & off of things instead of jumping, so I think he'll be okay, though we do keep a pretty close watch on him just in case. Right now he's snoozing in the downstairs window box in Andy's office and seems quite pleased with himself.

He's still doing well, though I was having trouble getting him to drink water until I discovered he truly thinks he needs to have his water in a glass. 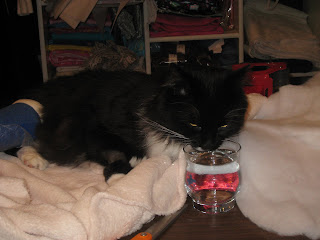 I guess I should consider myself lucky he doesn't want ice cubes.

And guess who has decided to forgive me for bringing Theo home? 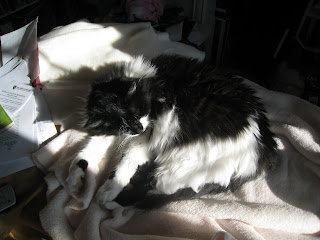 She's been growly and angry since Theo got hurt, though we aren't sure if she has been mad that we had a chance to get rid of him and didn't take it, or if she thought she was next in line for kitty torture, but today she has chosen to grace me with her presence and she has even condescended to purr when I pet her. I feel so special--and like a colossal chump for all the kitty groveling I've been doing.

The first sleeve for the baby aran is attached and I've started on the side seams: 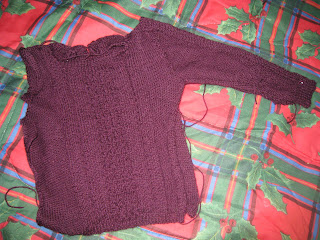 Don't worry, it isn't a really botched cabling pattern--it's inside out. The second sleeve is at the cap shaping & should be done this weekend. Then just seams & two buttons and I'll have number 14!!!!!

So the big question is, can I hold out until the end of the year without casting on something new? I'm so close, and I'm really enjoying dem fischer sin fru and though it's impossible to finish it by the end of the year, I could certainly get closer....like maybe finished with clue 3 (out of 7, God help me). Then I'd have gone 6 full months without casting on anything new, which would be truly amazing. Or I might break down and dump all my yarn into one big pile in the center of the house and dive into it headfirst clutching my favorite pair of knitting needles.....boy, they're both equally appealing right now, which tells you a lot about my fantasy life. Now if I could just find a way to work Antonio Banderas into the picture........