The vet called at 10:00 last night to say the surgery had gone well and we could call today to see about picking up our new bionic kitty today.

Thanks to everyone for your good wishes for Theo. We aren't sure how he got hurt, though falling, being attacked by a dog, or getting hit by a car are the most likely candidates. When we first took him in, it seemed like just an injured leg (which it was), but there must be an introductory class in vet school called "Scaring the Patient Means Greater Profits." After we had signed waiver after waiver stating that yes, we would want him resuscitated if he went into cardiac arrest and that no, we wouldn't hold the clinic responsible if they killed our pet, and explaining in enough detail to make me nauseous all the potential complications that could arise, we are so thrilled that he's fixed we will cheerfully pay darn near anything to get him back. Can't argue with a program that works, I guess.

We expected him to be in surgery yesterday afternoon, so I had most of the day to think over all of the vet's dire predictions and imagine the worst. When we finally found out that he wasn't scheduled for surgery until 6:30 that night, I'd had enough and we went down to visit Theo. If I'd been in a funnier mood, I'd have stopped to get a catnip plant to take him, but by 5:00 we'd been expecting to hear results for at least 3 hours and I just wanted to see my cat.

He had torn ligaments, a dislocated ankle, and a broken bone in the joint, but they were able to attach synthetic ligaments & put some pins in (this is where I asked to not receive any more detail because even this makes me woozy), and he will regain full mobility, but it will require physical therapy. God help me, we're really going to do kitty water therapy. Thankfully, that's about 8 weeks out, so we're going to just pretend we've never heard of that right now.

The vet said we can come and get Theo this afternoon, and we're to keep him reasonably still and keep him from jumping on anything...... Do you ever get the feeling that people who only see heavily sedated cats might have forgotten what they're really like??? I moved our mattress onto the floor so he could climb onto the bed instead of jumping, and during the day I can keep an eye on him, but I was really stumped what to do with him at night until I walked into the sewing room and saw: 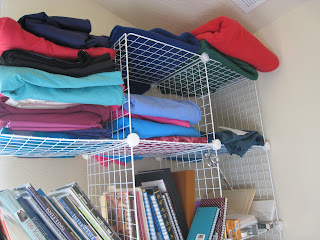 I'm thinking we could make a little portable cat run with another set of these wire things. It's light enough we can move it, but we can put a top on it so he can't jump. So it's really a good thing that I have such a large stash that I've had to get creative with storage options--it will also be solving some cat mobility problems. (OK, it's weak, but I have to take what I can.) We'll stop and get another set on the way to pick up Theo, and that will be one problem solved. Next up: How a cat with a very large cast on his back leg can use a litter box.

When Theo was transported to the clinic doing the surgery, his blankie got dirty, so they washed it and gave it back to us and Calisto has been warming it up for Theo: 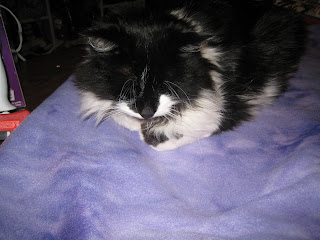 She has been really, really friendly over the last couple days, and we can't decide if she actually misses Theo, is excited that he's gone and she has the house to herself, or she was so freaked out by his screams of pain when we first found him that she's afraid we'll do to her what we did to him, but she certainly has been much more social. She might like Theo better now that he can't pounce on her head.

And in the anxiety of waiting to hear how the surgery went last night: 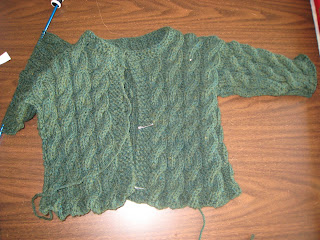 I'm down to the very last piece of WIP number 13. All I have left to do is finish the sleeve, sew the side & sleeve seams, and add 3 buttons.