Fir Cone Getting There

I just rounded the second corner!!!!!

OK, that might need some explanation. On the Fir Cone edging, I started right after the last corner, so finishing the second corner means I have finished half the edging already. Whoo hoo! 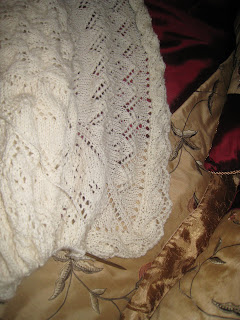 And the corner was at the top of the picture when I uploaded the picture--I guess Blogger is having some issues tonight. But you get the idea.

Now you can sort of see the first corner 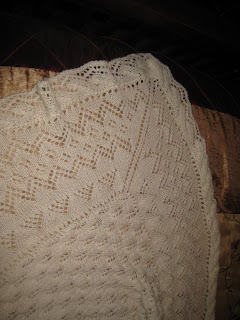 and Abby is right--it would make a great tablecloth. Actually, it would be pretty easy as the center square was done first. Just converting that into a rectangle would probably turn it into a nice size for a table cloth. I wouldn't do it with this one as it's 100% wool and would felt like a champ, but in an ivory cotton? Hm........

Theo refused to knit with me tonight--apparently it was a "male bonding" night: 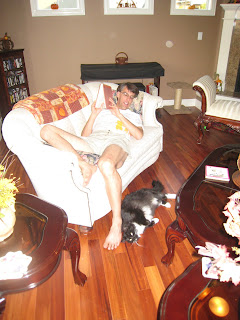 At least it wasn't beer and football.....