I Have Been 'MEMED"

I have no idea if "memed" is a word, or if "meme" is a word (spell check is saying no), but basically there's a large-scale game of blogger tag, and I'm "IT," having been tagged by Jill and by Toni in Florida.

The Rules:
Rules are posted at the beginning. At the end of the post, the player tags 6 people and posts their names. Then the player goes to each of the “named” people’s blogs and leaves a comment, letting them know they’ve been tagged and asking them to read your blog. If you’ve been tagged, you do the same, letting the person who tagged you know when you’ve posted your answer. Your answer, of course, is the answer to the following questions. Here we go!

I believe I was working for the Cystic Fibrosis Foundation as a contract fundraiser (I would later become permanent staff for a total of two years.) I had been in telecommunication sales, but that was during the frenzy of telecom mergers, and I had lost my job in the shuffle. I was burned out & tired and looking for a new challenge, and I decided that charities would be completely safe from mergers & acquisitions, as who would ever want to buy an organization that openly declares it doesn't make money?

Hold on to your hats--this is exciting stuff....

* Unpacking - we just returned from a wonderful time in Colorado at midnight last night.

* double checking to make sure that the "welcome home" dead vole is the ONLY gift from the cats during our absence.

* spending some quality time with my latest love interest-- 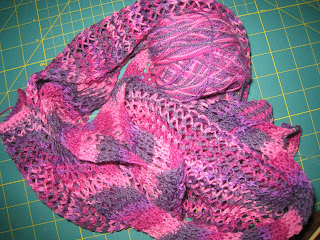 to which I am still showing amazing dedication. OK--you're right, it is not the ONLY thing I have on the needles (a form of monogamy I am not capable of), but it is the only one I worked on this weekend--which is sort of monogamy. I am capable of great dedication when it's the only knitting I have with me for 4 days......

snap peas, cucumbers, watermelon, grapes, pomegranates, oranges, apples, pickles, pretzels. I would eat potato chips daily if they didn't hurt my stomach, add inches to places I don't want them, and make my face break out, but as they do all three, it's hard to really say I "enjoy" them.....

Midvale, Idaho - home of Larry Craig and 150 other people who do NOT foot-tap in public restrooms
Moscow, Idaho
Richland, Washington
Boise, Idaho

There were a few other stops when I was too young to really remember them, so we'll be skipping those.

5. Things I would do if I were a billionaire:

Possibly die of shock, as I haven't ever played the lottery and don't know anyone with that sort of loot, but in Hypothetical Land:

1. Get off this yarn diet and just buy the house next door for my yarn & fabric stash.

3. Buy my entire subdivision & make it mandatory that anyone wanting to live here has to admit that Idaho is a desert and front lawns are completely pointless and a waste of time, energy, and water.

4. Put all the nieces and nephews through college, provided they spend two years in some sort of community service. I don't believe anyone should get a free ride in life--no matter how much money their relatives have.


Now it is my turn to tag 6 people to play (or not--Blogland is pretty lax on such things):